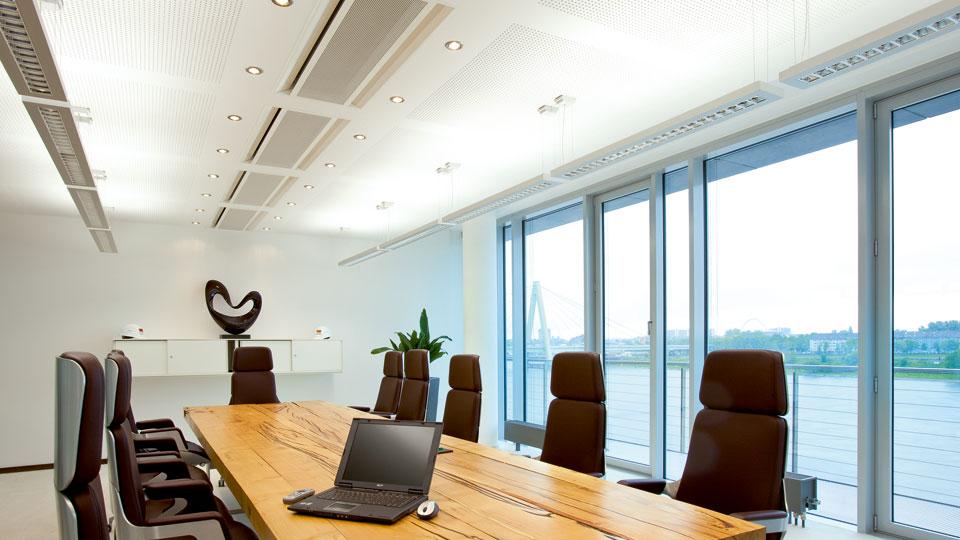 The “Rheinauhafen” (Rheinau Harbour) in the south of Cologne is a former industrial harbour and is currently redesigned into a bureau and living area.
Within the Rheinauhafen a spectacular ensemble of three identical buildings, the so called Kranhäuser, was created by Linster architects, Trier/Aachen/Luxembourg and Bothe Richter Teherani, Hamburg and already achieved world fame.
The tower in the middle, the Kranhaus1, was completed in 2008 and awarded the peoples choice award in the category business center in Cannes in March 2009. The twin building, the Kranhaus Süd, was inaugurated in 2009, the air conditioning technique was provided by the Pandomus Technische Gebäudeausrüstung GmbH and it was equipped with several TROX products.
In order to create a comfortable environmental atmosphere and highest possible safety in case of fire the Kranhaus Süd was equipped with slot diffusers, fire dampers, volume flow units and ceiling diffusers of TROX.
The slot diffusers and the volume flow units that are installed in the Kranhaus Süd provide a comfortable atmospheric Environment at low air velocities which helps the employees to work efficiently without being disturbed by draft in a secure working environment thanks to the use of fire dampers.